To Change or Not to Change? That is the (Constitutional) Question

If you are, like me, not an expert in constitutional law, your head may be spinning trying to keep track of the pros and cons of the recommendations.  What then are the primary recommendations for change, and how on earth do we sort through the legal arguments?  In this post, I go out on a limb and say that we need to focus on the goal of constitutional change and let go of the law. 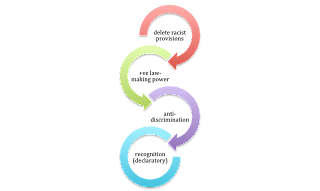 First is the repeal of s25.  This is not regarded as a troublesome recommendation.  It relates to the limits on federal representation of any State that excludes Indigenous people from voting in that state.

Second is the repeal of the so-called 'race power': s51(xxvi).  This provision not only allows the Commonwealth to make powers in respect of any race, but with no restriction on whether these laws would be beneficial or not.  As a general proposition, the notion of race is repugnant as a basis for law-making, and is probably inconsistent with international human rights treaties including the Convention on the Elimination of Racial Discrimination (CERD), as well as contemporary societal norms.

Having said this, there is still a powerful argument in favour of power to make laws in respect of Aboriginal and Torres Strait Islander Australians as a means of addressing the well-known gap in health, education, employment, housing and life expectancies between Indigenous and non-Indigenous Australians.  Interestingly, Justice Robert French is reported as suggesting that such a provision would be not a 'race' provision, but a provision responding to 'the special place of those peoples in the history of the nation.'
On the basis of the need still to enact legislation in respect of Aboriginal and Torres Strait Islander Australians, the Panel's third recommendation is to insert a proposed s51A giving such power.  It is prefaced by a number of preambular provisions including an acknowledgement of 'the need to secure the advancement of Aboriginal and Torres Strait Islander peoples.'

To accompany this provision, and to flesh out its context, is a proposed anti-discrimination provision (s116A) whereby no law may discriminate on the basis of race, except 'the making of laws or measures for the purpose of overcoming disadvantage, ameliorating the effects of past discrimination, or protecting the cultures, languages or heritage of any group.'

Finally, is the recommendation for a s127A recognising Aboriginal and Torres Strait Islander languages - considered likely to have a declaratory rather than substantive effect.

Arguments
The report was well-received in many quarters, though there has been debate in particular about the 'race' power and anti-discrimination provision.  I put these debates into three categories.

First is the argument that the breadth of the proposed provisions mean that we don't know how they will be interpreted in future.  What does it mean to be for 'the advancement' of peoples?  Will this give more power than anticipated to the Commonwealth?

My view on this is that the proposals may well give more power than is anticipated, but that this is also what has happened with other constitutional powers, such as the external affairs power and the corporations power.  Who would have thought in 1901 that these powers would be used so extensively to legislate in so many areas?  I don't think we should be afraid of this.  In reality, we cannot ever know what a future court will find, or how it will interpret any constitutional provisions.

In terms of the meaning of advancement or the context of beneficial laws, I would have thought that human rights jurisprudence can offer sufficient guidance on the meaning of such a provision, which is, it seems, not unusual in other constitutions.

Secondly, is the '100 steps too far' or 'one-clause bill of rights' argument.  I see this as reflecting an inherently conservative understanding of our Constitution.  While this overlaps to some extent with the issue of interpretation (above) it also reflects the existing nature of our Constitution as overwhelmingly a blueprint for governance, without any express human rights.  Again, I see no need to be afraid of addressing human rights within our Constitution.  This would accord with Australia's international human rights obligations, and jurisprudentially, represents a valid constitutional undertaking.

Thirdly is that the proposals are too complex and therefore will fail at referendum.  The way to a successful vote, on this argument, is by putting as simple a proposition as possible - usually this is framed as a provision 'recognising' Aboriginal and Torres Strait Islander Australians.  But what would this look like?  How would it be phrased, and what would it mean?  Back to square one...  In fact, the Panel has now investigated this, and has recommended how such recognition could look within our Constitution. We now have something to work with.

If the 'experts' keep telling the public that the recommendations are 'too complex to pass' then by definition there is no bipartisanship.  Instead, I suggest we need to remember what we have set out to do.

Remember the Goal?
Many of the responses to the Panel's report have been based on legal argument.  This is because lawyers are argumentative people.  The law is never truly settled and is always open to challenge and re-interpretation.  On this basis, I can't assess which side has the 'correct' argument, or how courts of the future will read the Constitution.  I therefore cannot assess the 'legal risk' in making the proposed changes.

We need to look beyond legal arguments and remember that this constitutional change is all about reconciliation, recognition and creating a new and inclusive national narrative.

Failure to change the Constitution represents a grave risk: that of missing the chance to have Aboriginal and Torres Strait Islander Australians write themselves into our national story, with the support of the wider Australian public.  That risk, in my view, is far worse than the courts having to interpret the proposed changes.

I think we need to accept that no one can predict exactly how these proposed changes will be interpreted if they are successful; and that no change is a real risk.  At some point, we need to trust that recommendations for change must work on some level.  Instead of becoming mired in doubt about legal implications of the proposals, we could recognise that the first stage of consultative groundwork has already been done by the Panel.

This would allow us to embrace these suggestions as a once-in-a-lifetime opportunity to advance reconciliation and human rights through important Constitutional change.

The recognition referendum is in the news again with suggestions that the Abbott government will not support a referendum if it turns into a 'de facto bill of rights'.  The challenges of passing referenda in Australia mean that without bipartisanship, it is likely to fail.

I should point out also that I make this comment as a non-Indigenous Australian lawyer. There is of course a diversity of views on this issue from within Aboriginal and Torres Strait Islander communities. See for example Celeste Liddle's recent piece on the Recognise campaign. I acknowledge that I have approached this issue from a particular perspective, which ultimately informs my personal view.